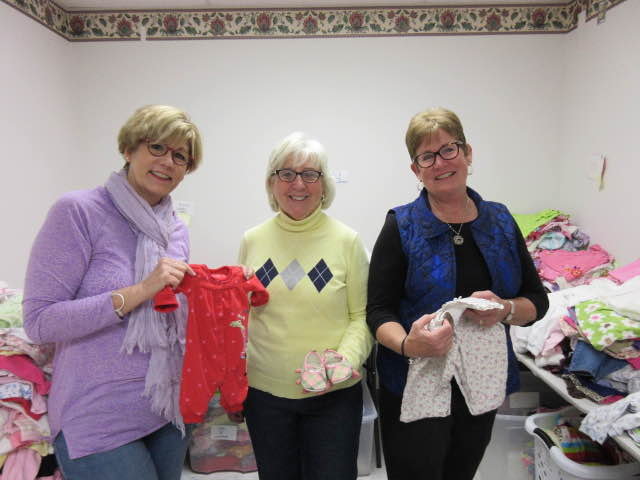 Fran Wasserman, founder/director of The Baby Bureau (from left), along with volunteers Chris Reigel and Sharon Carney organize “baby bundles” of clothing that they will send to impoverished families or who may have been victims of natural disasters.[/caption]

A volunteer trip to work with Hurricane Katrina victims in 2006 sparked an interest in Fran Wasserman to make community service her daily mission. The former Fort Washington resident enrolled in the School of Continuing & Professional Studies (SCPS) at Chestnut Hill College, and as her senior project in 2011, she decided to help underserved moms and their babies through the creation of The Baby Bureau, a non-profit with a heartwarming goal — to dress those babies with new or gently-worn clothing.

“Chestnut Hill College really helped me launch The Baby Bureau, and with community support, a dream was born,” said Fran, 59. “The first funding came from a $500 check I received from the Religious of the Assumption, as the winner of the college’s St. Marie Eugenie Milleret Award.”

Fran was a resident of Fort Washington from 1998 to 2014. Her children went to Upper Dublin schools and are now grown. “It was a great place to raise kids, and I was able to operate the organization right in my own home.”

Fran delivered her first baby bundle to the Montgomery Department of Health, which consisted of 10 to 15 pieces of clothing. In her first year, she delivered 70 bundles. After Hurricane Sandy, The Baby Bureau sent bundles to Staten Island. Each bundle is wrapped in a blanket or quilt and contains about 25 items such as onesies, sleepers, bibs, hats and a new baby rattle. And the bundles always include a pair of new or reconditioned shoes for when the babies take their first steps.

Many churches, synagogues and schools have stepped up to host clothing drives for The Baby Bureau. Fran has four volunteers who have been working at the Baby Bureau for the last three years on a part-time basis. “I feel very lucky to have been able to bring The Baby Bureau to life in Montgomery County due to the giving nature of the community,” said Fran. “RSVP of Montgomery County assisted me tremendously with the actual 501(c)3 application through their VEC department (Volunteer Executive Consultants). They were fantastic!”

And The Baby Bureau keeps making growth spurts. The organization has dressed over 1,200 babies, and Fran no longer works out of her home, which is now in New Hope. The Baby Bureau is located on the Warminster Campus of Abington Health. It is also adding Bucks County to its servicing area, and it now has relationships with social service providers in the area that work with its target demographic.

“We also serve as a platform for groups to perform service projects at our space,” Fran explained. “Arcadia University has provided work study students for three years and sends their new student orientation groups to volunteer at the beginning of each school year.”

The Baby Bureau was self-funded for the first two years and now relies on donations and grants.

They have many community partners, such as the Nesting House, a children’s consignment shop in Mt. Airy that has been donating clothes weekly for the past three years. St. Mary Medical Center and Interfaith Housing Alliance have also come on board as partners.

In May, 2013, Fran was named Citizen of the Week by the Ambler Gazette. Forging ahead, Fran is now working on plans for the organization’s first fundraiser. “This was the best project I ever got involved in, and knowing we are making a difference in the lives of moms and their newborns is a joy. The community has opened their hearts and arms to us, and I can’t thank them enough.”